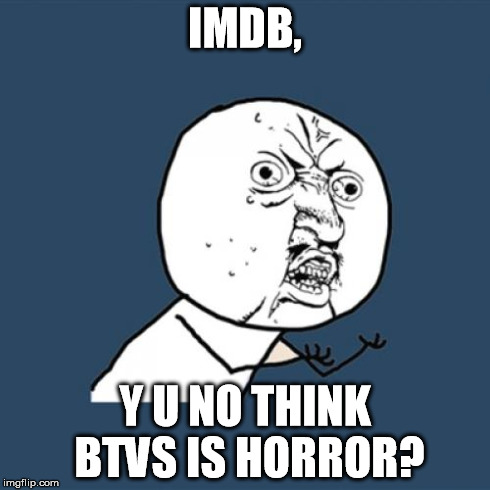 Because Buffy contains both top-notch fight scenes and “ticking clock” scenarios, it can be portrayed as an action show.

Does Buffy tackle serious issues? Sure! Willow’s coming out, Buffy getting played by a one-night stand, the death of loved ones, and the purpose of a soul are all among the situations that characters struggle with on the show. It’s not devoid of comedy either. As with most of Joss’ work, it falls into the category of authentic life, which is both hilarious and horrible.

Did you know there are supernatural elements in the show? No, I’m serious. It wasn’t just Dawson’s Creek with a female lead.

To be reclaimed, I must prove that Buffy meets Stephen King’s 3 criteria: the gross-out, the horror, and the terror. While many of the monsters fall into the gross-out category, my favorite one is actually Warren making a robot girlfriend and then making Spike a robot Buffy. While not the typical splatter, it’s gross because…yuck. More traditional gross-outs include Willow ripping off Andrew’s skin, Buffy’s reanimated corpse, Anya’s frat massacre, Cordelia’s impalement, the praying mantis teacher, and Caleb gouging out Xander’s eye.

The terror includes the “Hush” episode, the monster that steals kids’ breath in the hospital, when Buffy is in an asylum and they try to convince her she’s insane, Caleb murdering a potential after picking her up on the road, the First Evil, Dawn’s sudden appearance, and Buffy’s return from heaven.

“The first thing I ever thought of when I thought of Buffy, the movie, was the little…blonde girl who goes into a dark alley and gets killed, in every horror movie. The idea of Buffy was to subvert that idea, that image, and create someone who was a hero where she had always been a victim. That element of surprise … genre-busting is very much at the heart of both the movie and the series.” –Joss Whedon

What else in Buffy makes it obviously horror?

P.S. On January 26th at 7:00 CST, we’ll be discussing Creed on Twitter with one of the authors. If you can’t make it, post here to join in the discussion asynchronously.

Keeping the Love Alive for Buffy the Vampire Slayer